The Miracle of the Harbour Town Clubhouse Video and article courtesy of The Island Packet. Every 50 years or so, Hilton Head Island pulls off a miracle in Harbour Town. A ribbon-cutting ceremony today at the new $23 million Harbour Town Clubhouse revives the miracle of 1969. That’s when the first clubhouse was finished. It was a rather lonely building in the woods. A new marina with candy-striped lighthouse were just beginning to emerge from the marsh nearby. They say the clubhouse paint had not yet dried as professional golfers began teeing it up, and Harbour Town Golf Links designer Pete Dye was still grooming one of his devilish sand traps. This time, the miracle is re-investment. And the new clubhouse opens with weeks to spare before the touring golfers return April 13 for the 47th playing of the RBC Heritage Presented by Boeing. “We feel that we have much more than just a golf clubhouse,” said Sea Pines Resort president Steve Birdwell. “We hope it is an iconic destination for the visitors and residents of Hilton Head Island for generations to come.” Brothers Charles and Joe Fraser, who developed Sea Pines and got the tournament rolling, did not live to see the new vote of confidence from their successors, William H. “Bill” Goodwin Jr. and Alice T. Goodwin of Richmond, Va., and their children. The Goodwins have now rebuilt the Plantation Club and the Beach Club. They have reinvested all of the resort’s cash flow and much more into the bold idea of Sea Pines. Perhaps no one represents the miracle of 2015 better than John Cottis, the project superintendent for Choate Construction Co., based in Atlanta. “We did not have a Plan B,” Cottis said of his job to cram a 16-month project into 10 months between tournaments. “The glass is never anything but full. Not half-full. Full. That’s the way we all saw it.” ‘Breathed it’ A lot of things were working against the contractor. Time was the main thing. Demolition on the old clubhouse began May 9, 2014. The new one was finished March 6, 2015. They put a three-story, 55,000-square-foot building on the site of the old one of about 30,000-square feet. And it had to mesh perfectly with an existing adjacent building, the Harbour Town Conference Center. Workers put in 60-hour weeks, working six days a week and sometimes seven. The site was abuzz with 125 to 160 workers per day. They had to be shuttled to the work site, which is surrounded by residences and a golf course that never closed. The contractor had to lease land off-site from the Town of Hilton Head Island for materials storage. The job involved 38 subcontractors and vendors, said Cottis. Only five workers were Choate employees. Cottis greets workers by name. He gives tours. He reflects on his childhood when he wanted to be a club pro, and when his dad brought him from Savannah to Heritage tournaments at Harbour Town. He thinks about his roots in the carpentry trade — which he preferred over college — helping build homes on a booming Hilton Head. He mentions his other local jobs in 15 years with Choate — heading the new renovation of the Long Cove Club’s clubhouse on Hilton Head, the Dataw Island Clubhouse near Beaufort, and the cottages at The Cloisters on Sea Island. And he says none of it compares to being a part of the Harbour Town Clubhouse. “We lived it,” he said. “We breathed it. We ate it. It was our life for almost a year.” When the certificate of occupancy was delivered, a great burden was lifted. And he cried. To read the rest of the article, click here 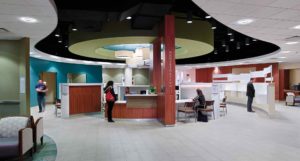